Grand Final Day. What better day to spend it than to go for a ride?

Arrived at Fed Square a bit late and found no-one waiting so took off straight away. People were flocking to the MCG already – there were hundreds already queuing to get in and it was only 6:30 in the morning. Weirdos.

Uneventful run up High St/Plenty Rd until I spotted a Bunnings. Bloody paranoid but I rolled in and waited a few minutes until it opened and bought a long arm allen key. This was my first big ride on Phil Wood hubs and evidently I’m still mentally adjusting to the fact that they don’t have as big a gripping surface as track nuts (well, they don’t appear to but I’m no engineer). When I first got them I rode out to Plenty Gorge Park and hammered some pretty rocky trails and noticed that my chain tension went very slack which got me thinking “Did I do em up tight enough? Is it because they don’t have as much grippiness on the dropouts? Is it because they’re not mating well with the grooves made by the old track nuts?” So, knowing that there were some fast bumpy descents coming up and thinking how much fun it would be to throw the chain at full speed, paranoia won out and hence, the long arm allen key with which I proceeded to crank the hell out of all the Phil bolts.

Seemed to work, chain tension was fine all day and I didn’t have a single mechanical.

(Incidentally, thanks to Shifter Dan for the wheel build etc. If you need wheels, call Dan) 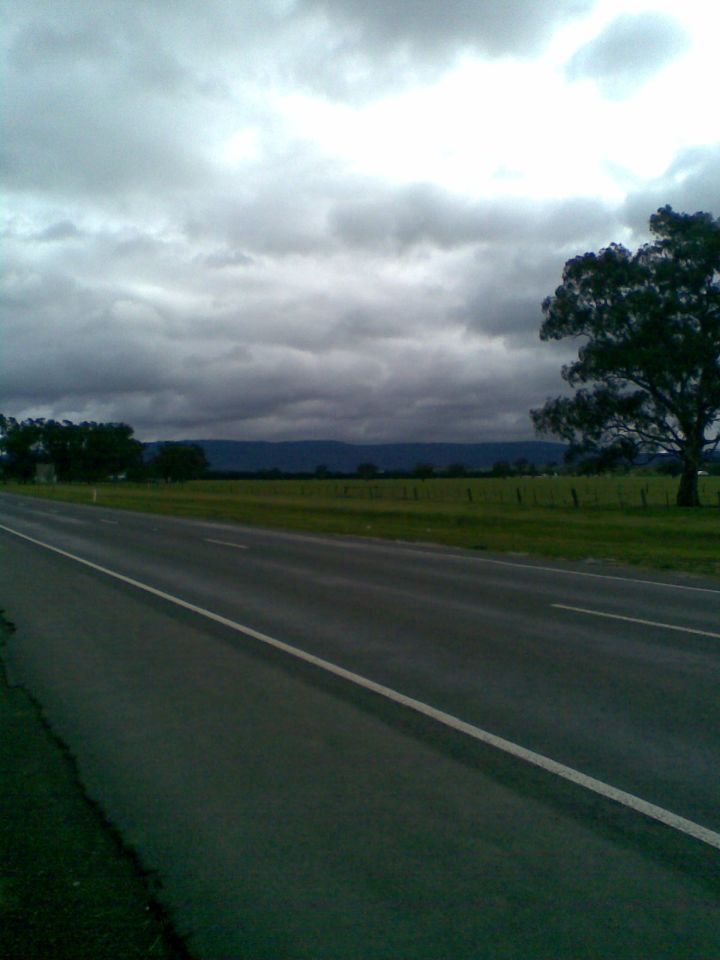 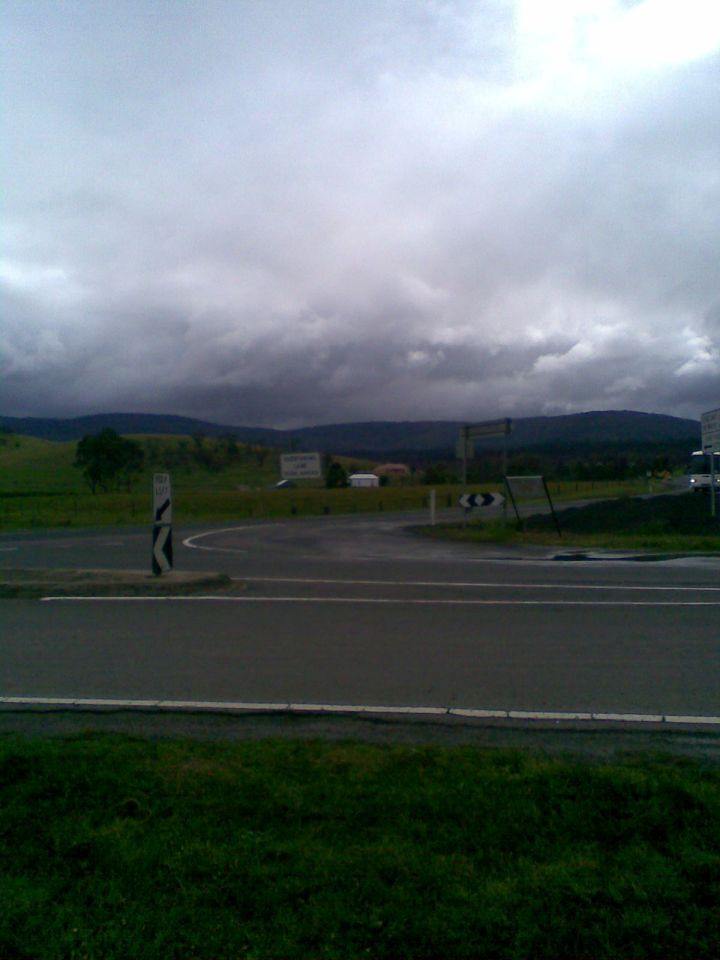 Anyways, this was my first time back to the Kinglake area since the Black Saturday fires so it looked very different. Everything’s burned of course but the weather was so cool and wet. There’s lots of grass and moss and new regrowth from the trees. It’s all black twisted branches against bright green buds. Saw some people building a fence and they called out a cheery hello. Lots of Aussie flags out the front of empty lots filled with the remains of old houses and the beginnings of new houses. A strange mix of destruction and construction. Hope all the stuff we donated helped. 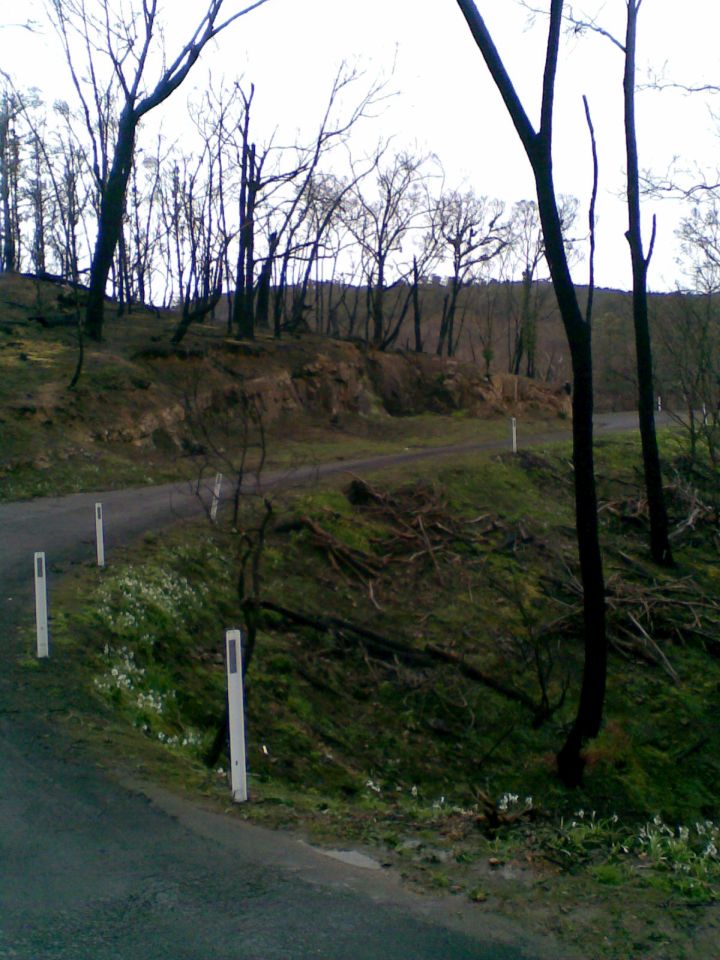 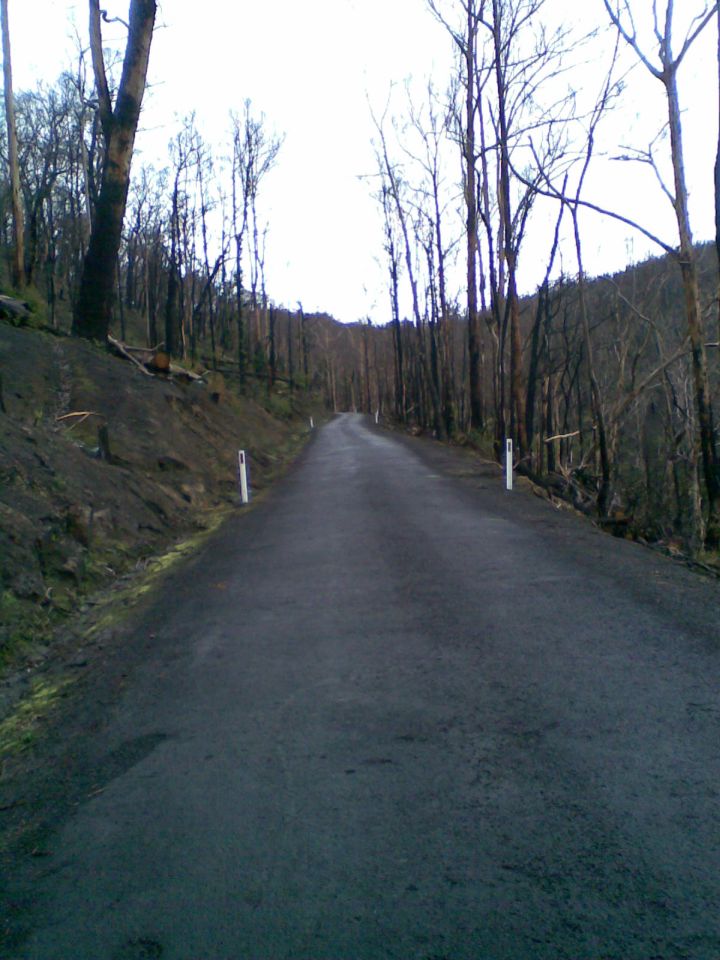 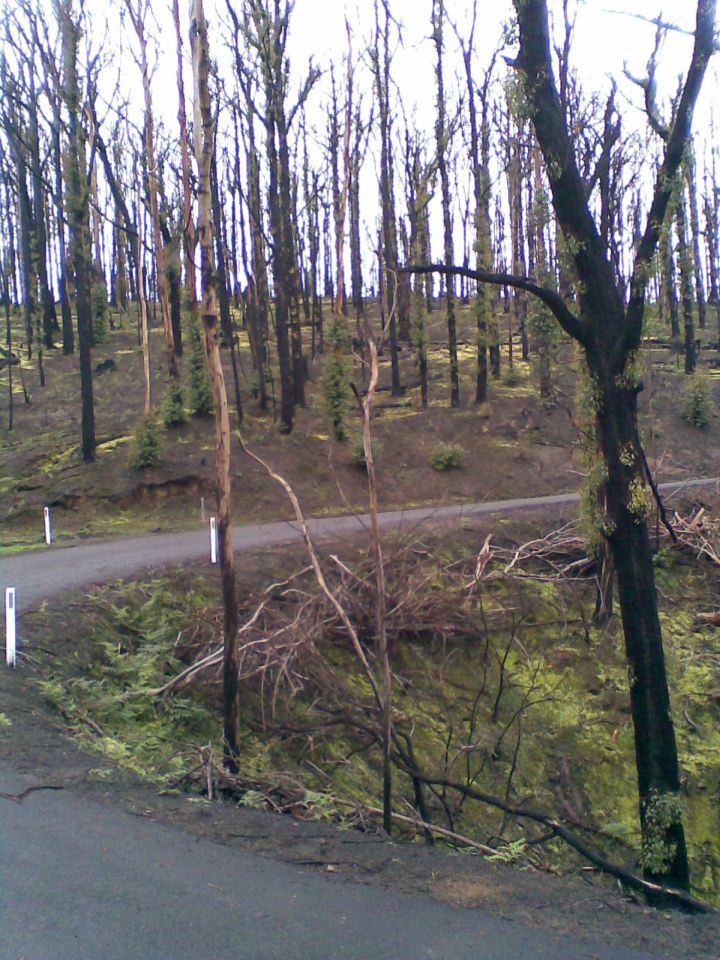 Didn’t stop long at Kinglake West – the old shop’s gone and there’s a converted shipping container in its place with a sign saying “Kinglake West Post Office” on the side.

Fast run down to Hazeldene where I was very happy to see the shops and bridge survived. The old “waterless dunny” is still there too. Still smells as sweet as it ever did. 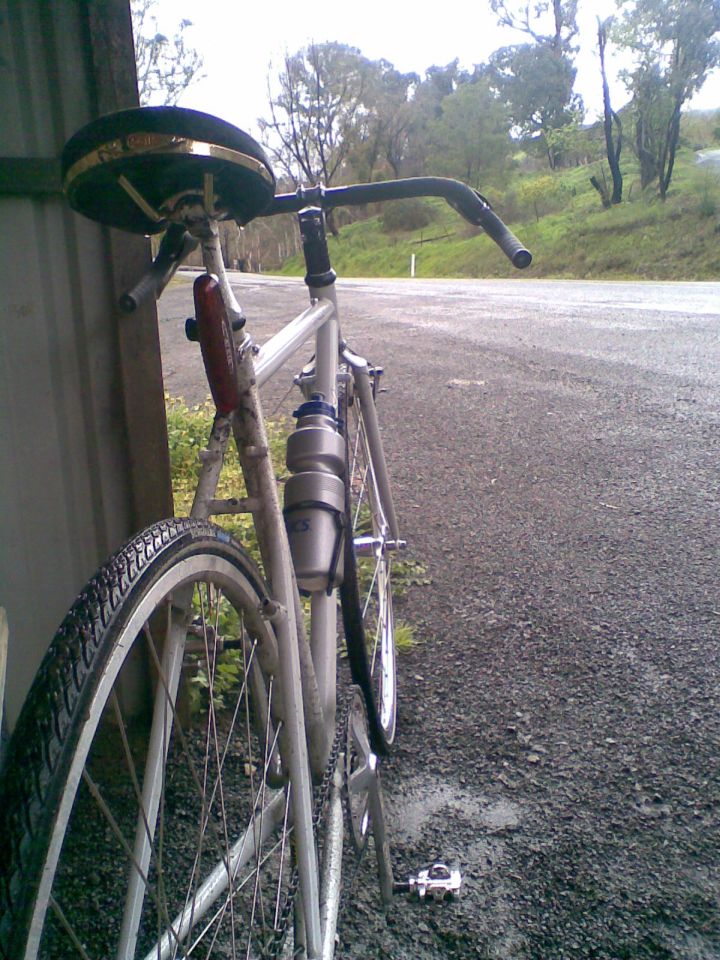 Flowerdale was next. Pub still standing but plenty of burnt trees around the area. It was such a wet day, all the creeks and rivers were overflowing, runoff washing across the road. 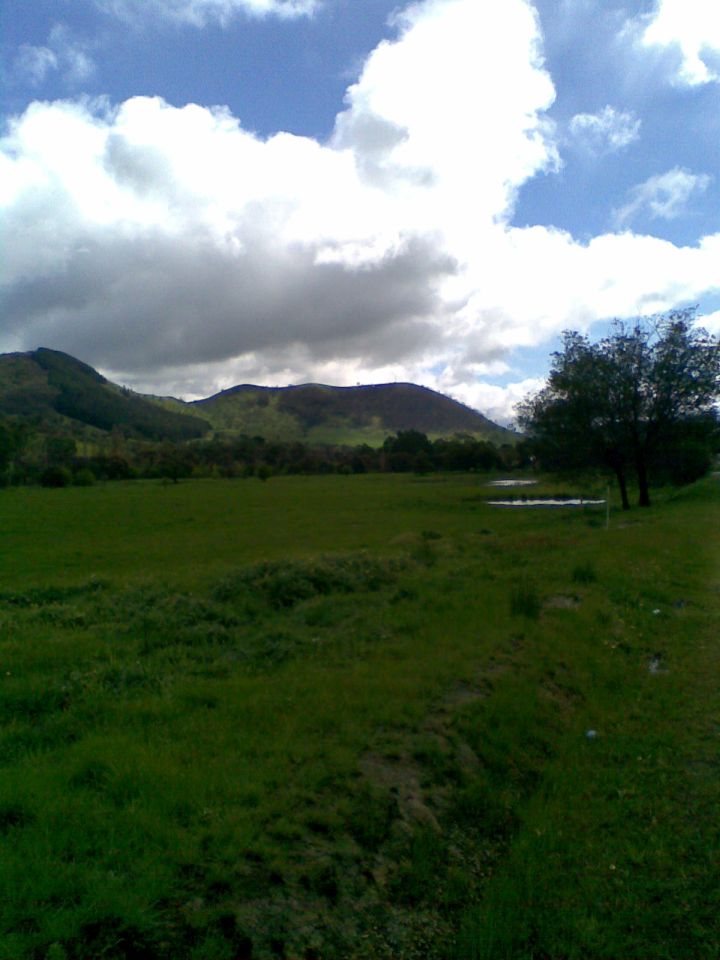 I cranked out the k’s until Junction Hill, the second climb of the day. This was the steepest, shortest and least scenic climb. Lots of standing up on the pedals and slooowly cranking it over. Very pleased when I saw the bus stop at the top and stopped there for a breather. 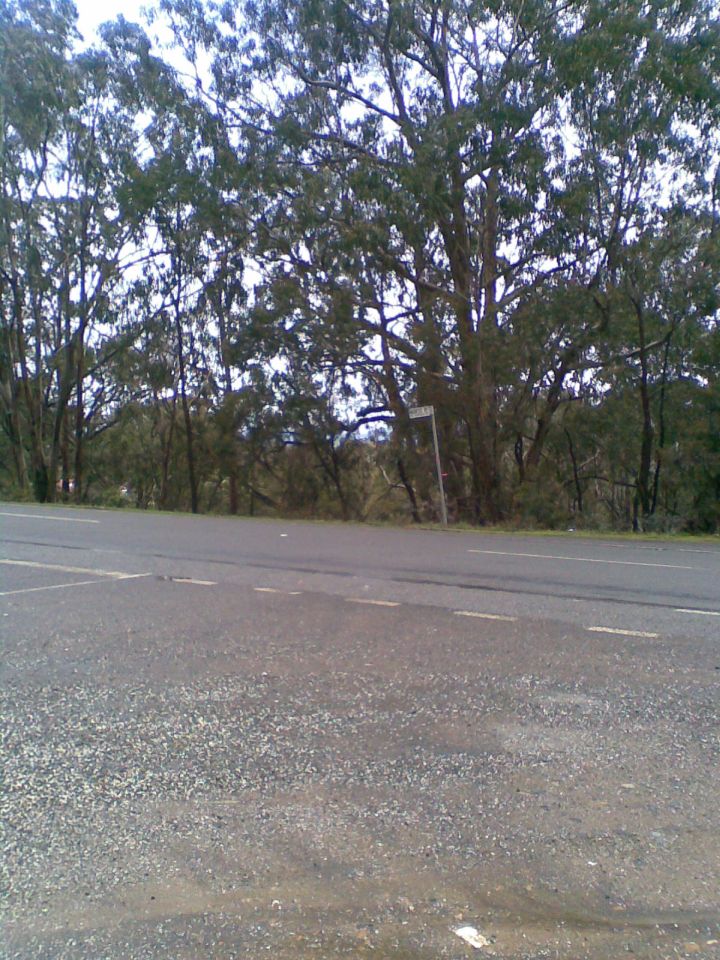 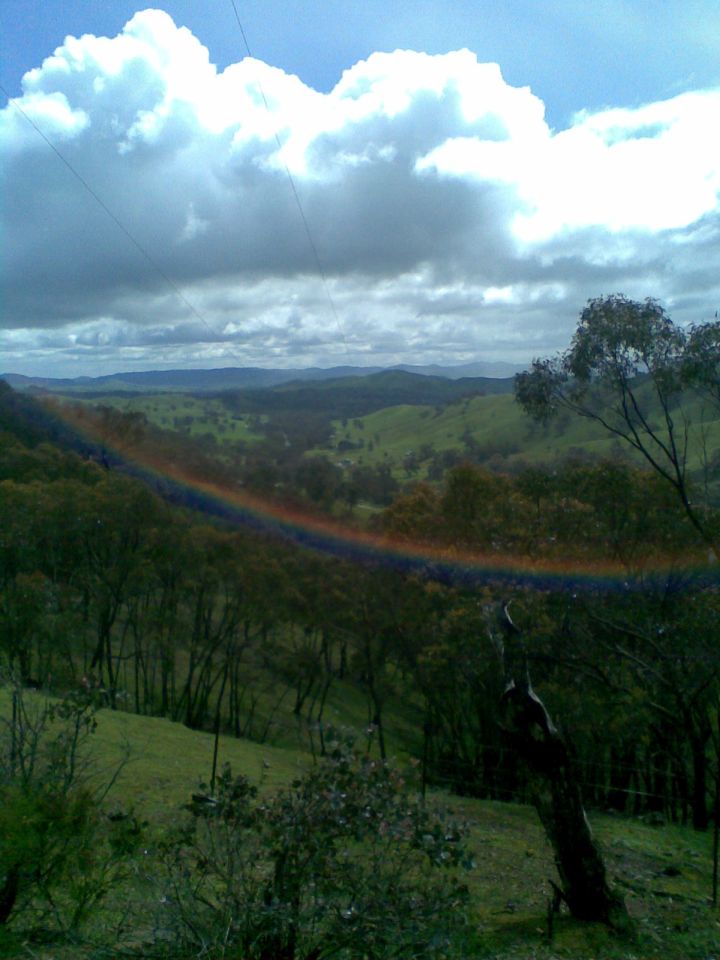 Awesome views out across a valley from here and then it was down the steep side towards Yea. It’s only about a 2.5km descent but half way down I remembered why I don’t like it. It’s something like 7% grade, it’s got windy corners tight enough to warrant braking and there’s always cars passing you from behind so you stay over on the shoulder. The shoulder is wide enough but the bastard thing is riddled with holes and broken bits that have just been paved over so, from a distance (and at speed), the surface looks smooth until suddenly you’re bounced out of your seat and hanging on for grim death. Gah!

After that it’s all downhill in the drops on a nice wide shoulder all the way to Yea. 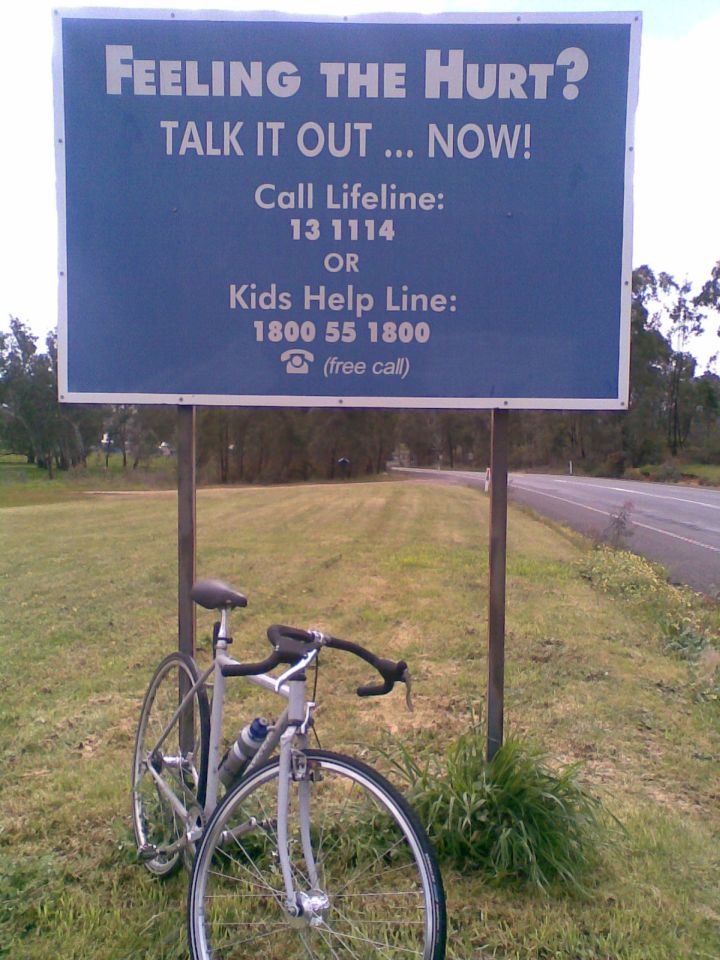 Hit Yea about 12:30 and didn’t want to linger too long. Got an eclair from the bakery and also some sandwiches for ‘ron and then hit the road. 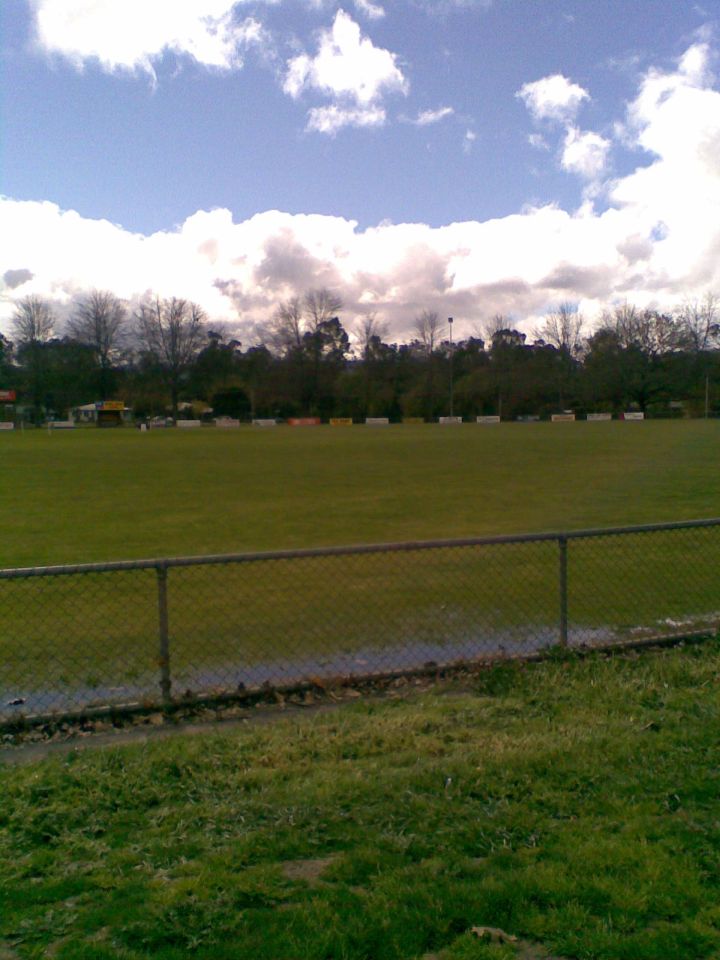 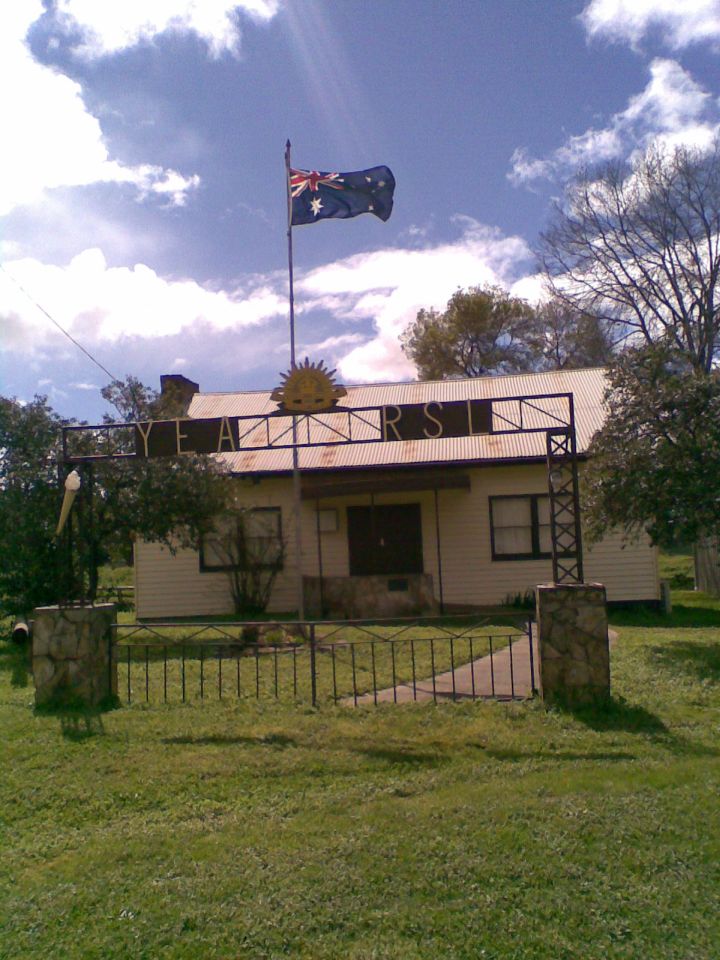 This was a pretty miserable leg. Goulburn Valley Highway had no shoulder at times, there was a lot of caravans, trailers, trucks etc. I was riding straight into the westerly wind and it started raining more heavily. Oh well, I just kept pushing the pedals into the wind and tried to keep the handlebars straight when it got gusty. I knew it was only ~19km until my turnoff so I didn’t get too upset by it. As a result, I was there before i knew it – King Parrot Creek Road. 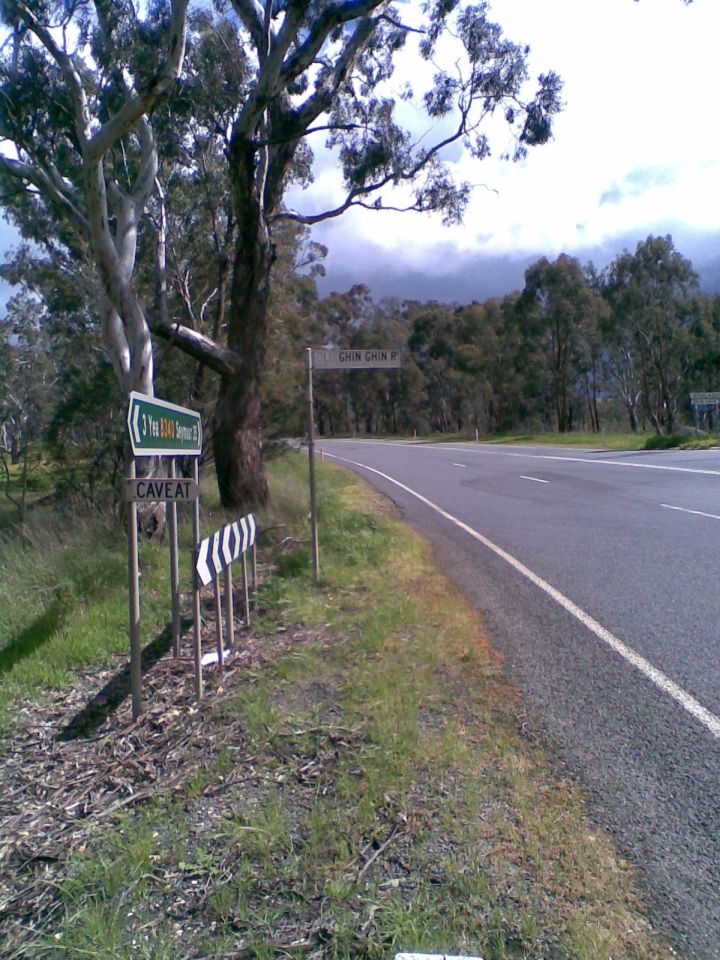 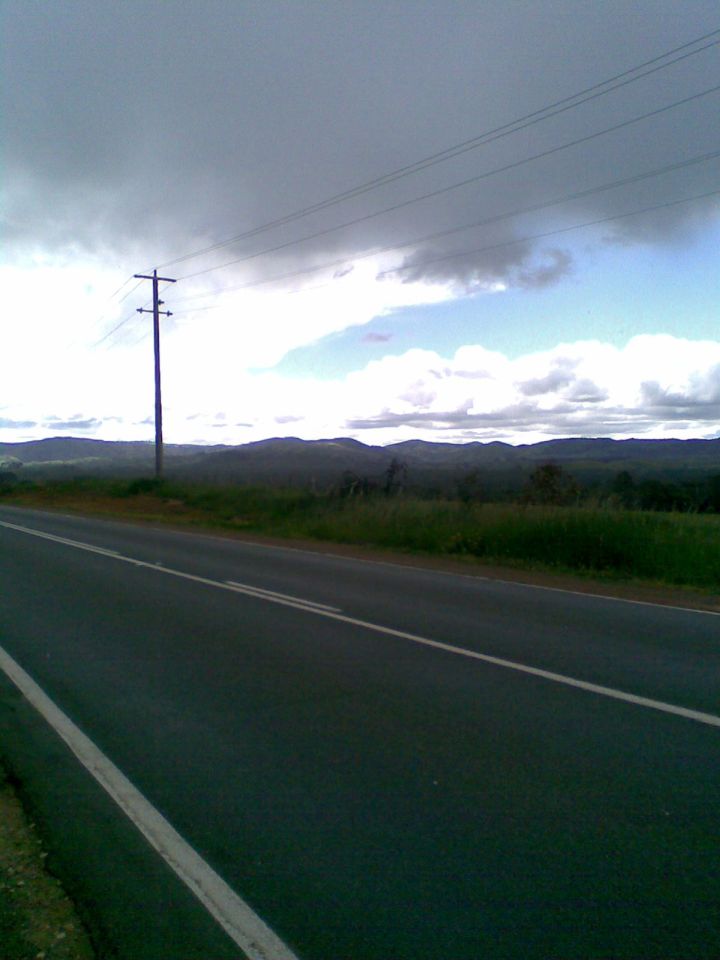 For some reason I thought this was going to be all dirt but the first section was chipsealed. Meh, didn’t bother me too much – there was hardly any traffic, the road was wide and smooth and rolling and it was taking me straight up an awesome valley. Too good. 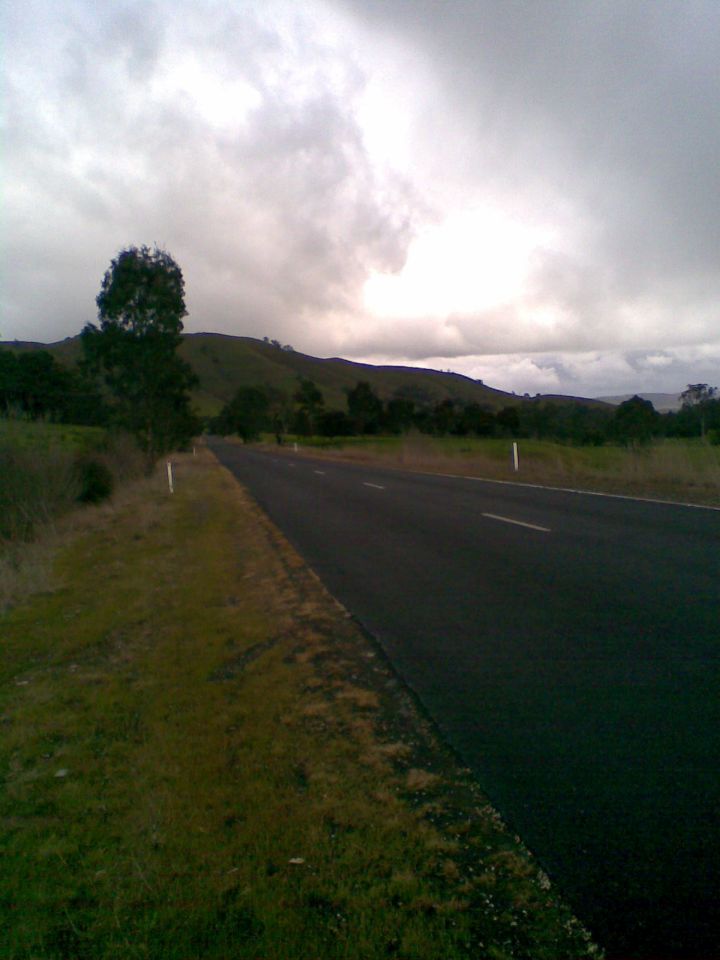 The valley was greener than green. Cows and sheep in the thousands. Crazy steep, lumpy grass hills on either side. Blue sky in patches between rain clouds. Wunderbar. I started a stampede as I passed by a herd of cows. The ones right near the fence all stopped chewing and stared at me as I rolled by. Then one of them flinched and they all shat themselves and started running. The rest of the herd saw the movement and took off too. Then the thousands-strong mob of sheep behind them saw the cows running so they all started bleating and took off as well. I was well off into the distance and looked back and there they all were still running off up the hill miles away from the road. 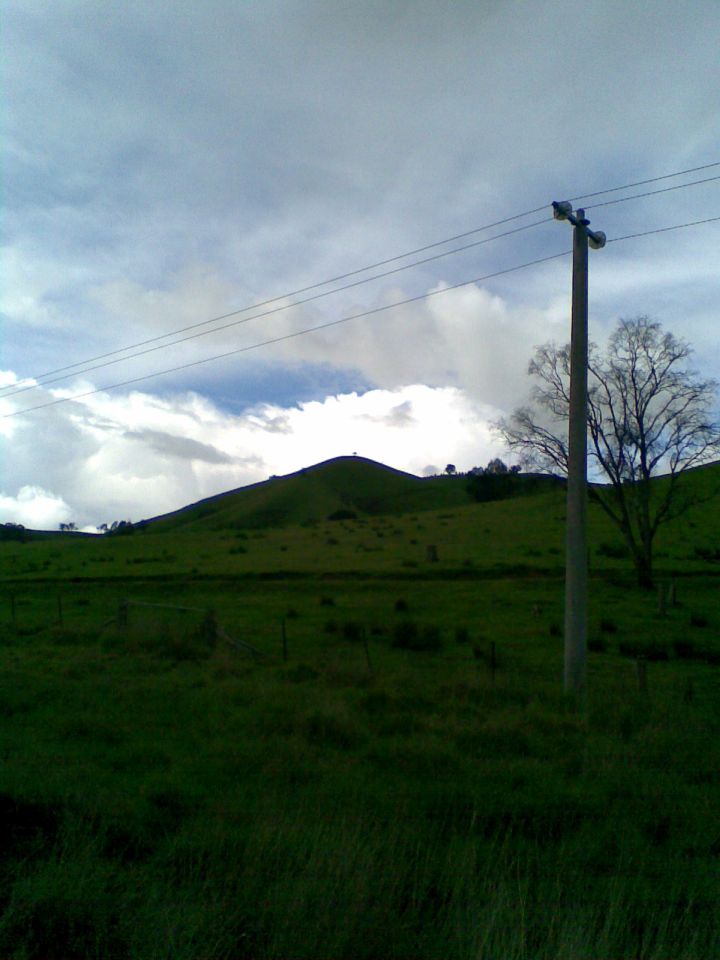 Not all the animals wanted to run away though. I lost count of the number of magpies that attacked me. I realised after a while that they give a distinct warning cry when they’re in divebombing mode. Only got hit once and I think it was because he got caught by the wind and flew straight into my helmet, hehe. When I heard their warning cry I’d just flip down the peak of my cap and keep pedalling. Gotta admire their tenacity.

Speaking of admiring birds, how awesome are cockies! The valley was full of sulphur-crested cockatoos and they were having a great time. Squawking like freaking pterodactyls and chasing each other around. Oh man, there’s nothing more loud and grating than a screeching cocky. They just don’t care. I love it! 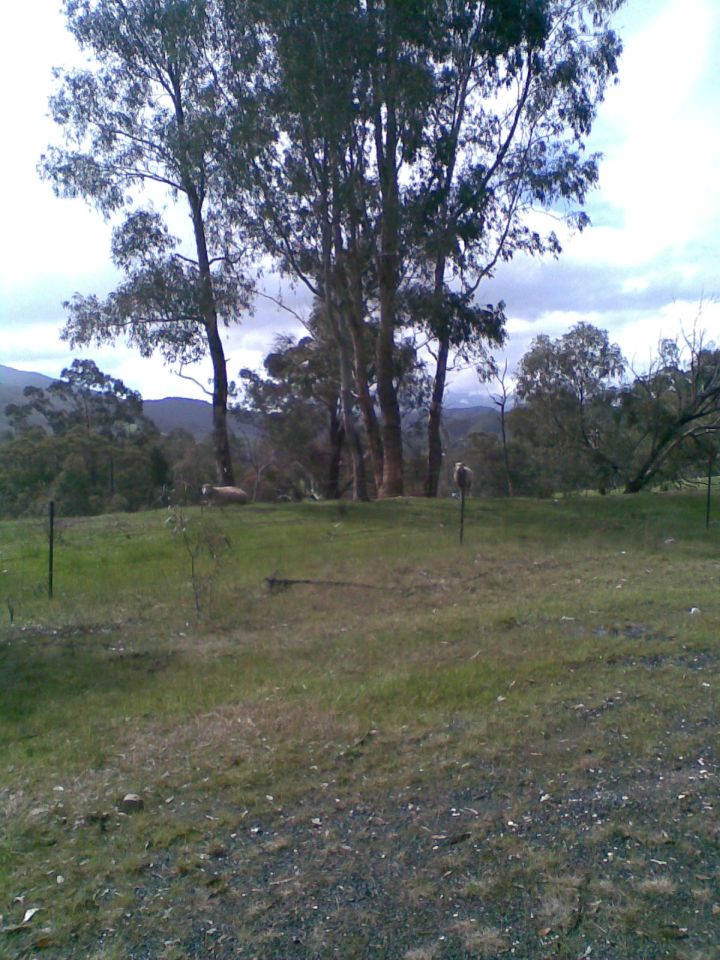 So, after Strath Creek the road does in fact turn to dirt. At last! And it did not disappoint. Lots of fast flowing rollers – smooth enough to be super fast, but slippery and rocky enough to give you “Whoa!” moments if you choose a bad line and end up in a gravel patch or a water rut. 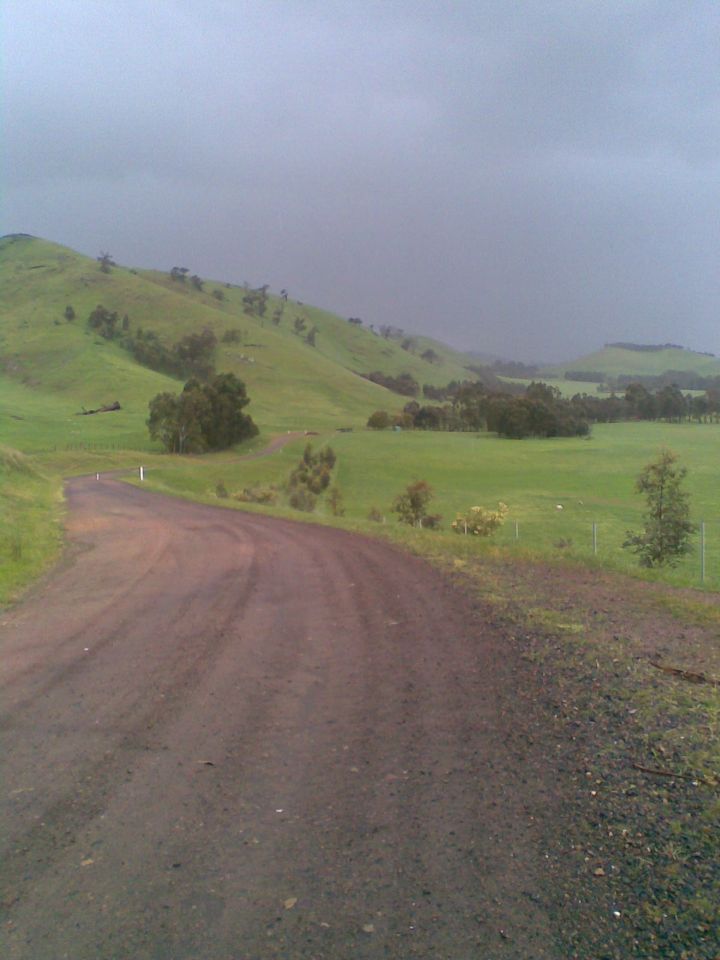 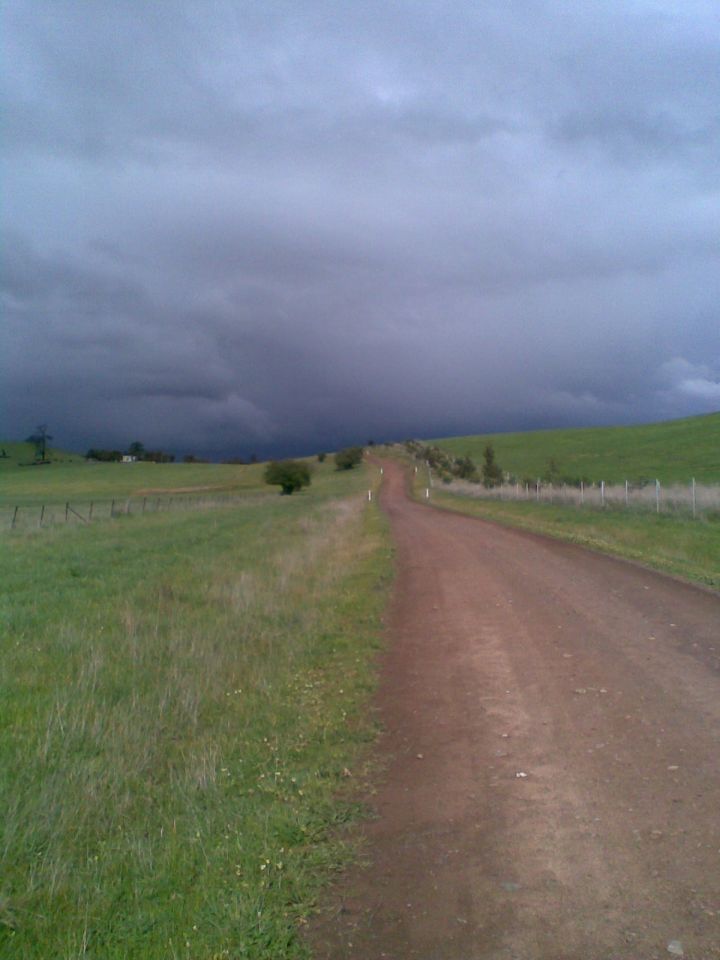 When the dirt came to an end and I hit the bitumen again I was peaking. Fists in the air and calling out “Heck yeah!” to the cows. Simple pleasures for simple folk, huh? 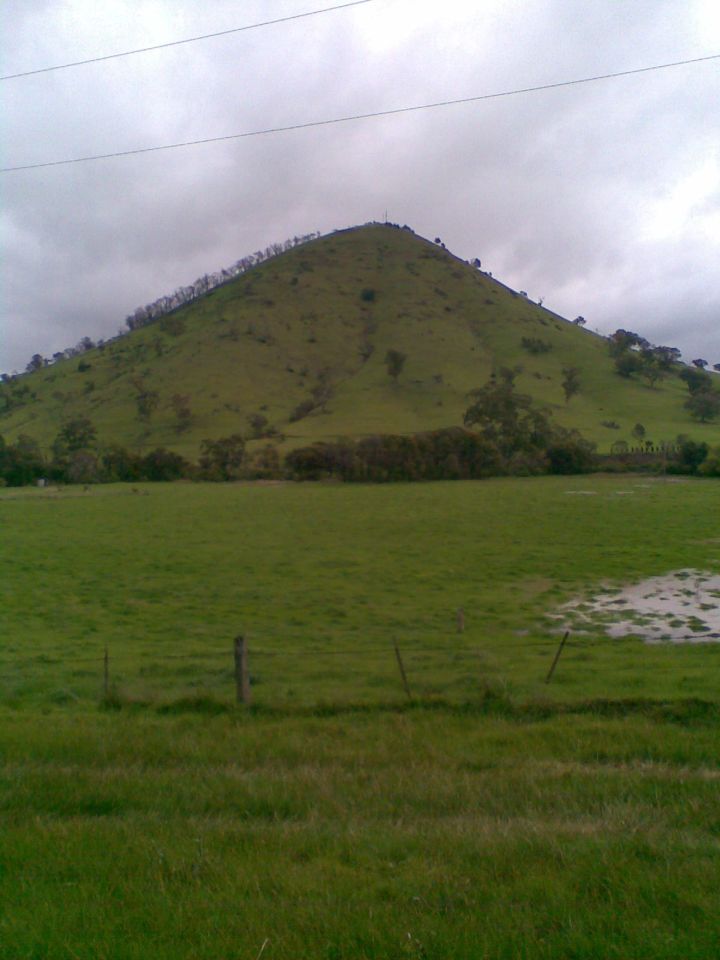 The high wore off pretty quickly as I joined back up with the Whittlesea-Yea Road and started heading up to the last major challenge of the day, the climb back up to Kinglake West. I was eating well – I’d been nibbling steadily on the two sarnies from Yea – and I think I was drinking enough but I hit a bad patch. It started raining, which didn’t help. As the gradient went up, the rain came down in buckets and my hands started getting too cold.

I had a dry pair of windstopper gloves in my bag so I wrung out the ones I was wearing and swapped them for the dry pair. Pfft, fat lot of good that did – the dry pair was soaked within minutes. Everything was soaked. I was wet to the skin and getting cold even though the hill was getting steeper and I was cranking up it like I was in slow motion. Ugh.

I saw the 70km/hr speed signs up ahead and realised I was getting near the top. This was the steepest part of the climb – the hardest part of the hardest leg before home time. Not much power left in the old legs so I just kept pushing on slowly through the rain. The water was running across the road in rivers, my nose was running like a tap and sending streamers of snot mixed with helmet-sweaty rainwater into my mouth. Cars flew by with warm dry faces looking out from inside and the rain just came down heavier and heavier.

And then it started hurting and I realised it was hail.

And then it started really hurting – stinging like buggery on the exposed skin of my arms and legs – and I started swearing, “Faaaaaaaaaaaark!” It came hammering down like a bastard and I kept cranking into it because I knew I was only a couple of k’s from the top. The amount of ice accumulating on the road (and on me) got quite ridiculous so I had to stop and take a photo. Bloody hell. The stuff was everywhere – a thick layer of it over the road. I was only 1km out of Kinglake West so I pushed on and eventually rolled into the safe haven of the dunnies at the top of the hill. 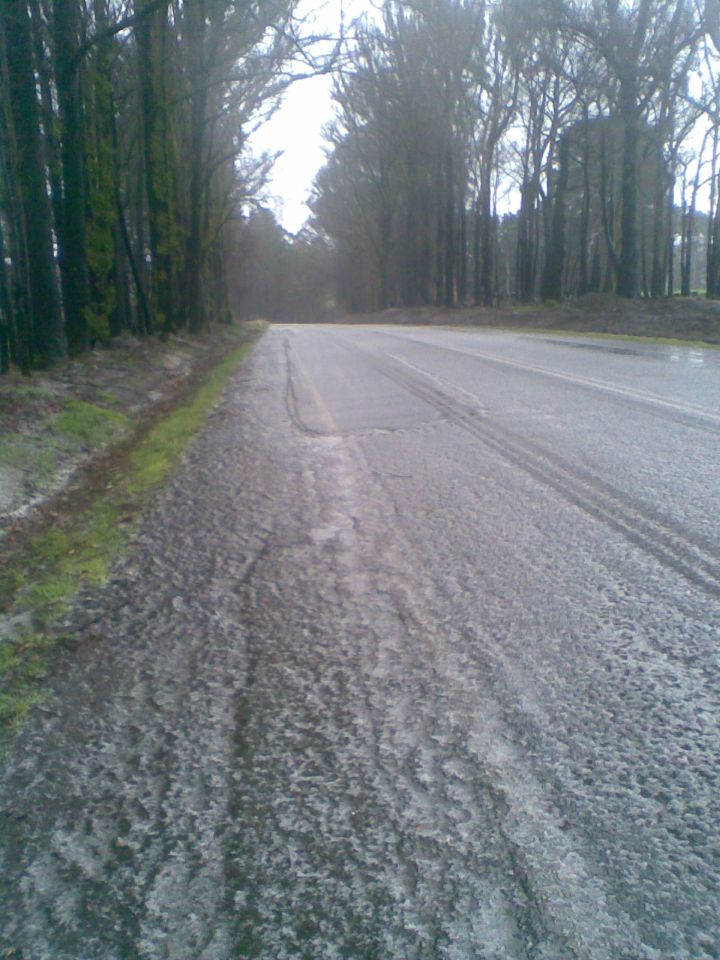 I was soaked to the skin with icy hail water, it was about 4:30pm so dusk was approaching and although the hail had stopped, the rain looked like it had set in for the night. There was certainly no more warming sun to be had that day and I realised I wasn’t going to get dry and warm unless I got inside somewhere. Rolling into Kinglake West, I was finding it hard to work the brake lever with my cold hands. I didn’t like the idea of a freezing cold descent down to Whittlesea with everything shivering uncontrollably. 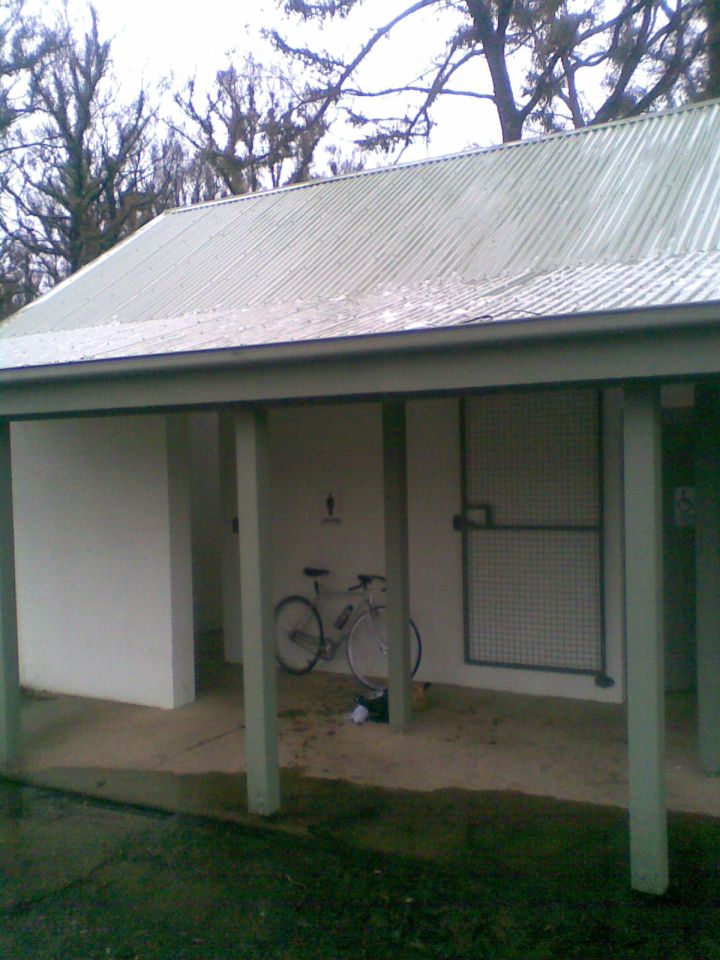 So, call it the cold, call it a bit of the bonk or maybe just the 180km in my legs, but I spat the dummy and called in for immediate evac.

I froze my jocks off until the sag wagon arrived, got changed, chucked the bike in the back and finished the ride on four wheels instead of two.

Wifey’s a nurse and she said I appeared mildly hypothermic when she picked me up. I dunno about that but it took me ages to warm up. What a crummy way to end such an awesome ride!

Add this one to the “unfinished business” list for next year.

View all posts by admin